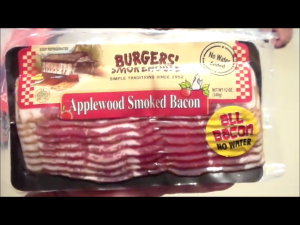 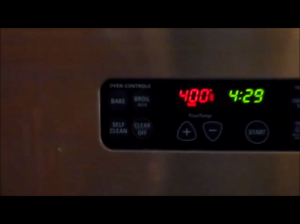 Set the oven to BAKE at 400 degrees

1. Set oven on BAKE to 400 degrees. 2. While you are waiting for the oven to heat up, take a cookie sheet or a flat pan with sides on it, place some foil over it. Make sure the foil wraps over the sides, because there will be grease that will fill up the pan. It won’t fill up all the way, but it will run over a totally flat pan. I always put 2 layers of foil to make sure no grease gets on to the pan. 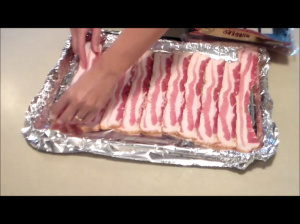 Lay out the bacon strips on the prepared tray

3. Open the bacon and start separating the strips. Touching each other is ok, but you do not want to stack them. They will try to stick together when they start cooking. 4. Once the oven hits 400 degrees, put the pan of bacon into the oven.

PUT THE BACON IN THE OVEN 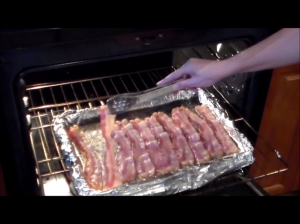 5. After about 10 minutes, it is time to flip the bacon. The best way is with tongs, but a fork may also do the trick. Just work your way through each piece of bacon and turn them on the other side. Put the tray of bacon back in the oven.

After 20 minutes, check the bacon in the oven to see if it is finished or needs more time

6. After about 20 minutes in, it is time to check the bacon. If the strips are real thin, the bacon might be done already. Otherwise, just make sure they are not burnt and put the bacon back in the oven for a little while longer. 7. 25 minutes should be plenty. If the bacon is extra thick, then it might have to stay in a little while longer. 8. While the bacon is cooking in the oven, get another flat pan, plate, cookie sheet, or something that will take some heat. Even a paper plate will do at this point. Stack a few paper towels up to put the finished bacon on when you take it out of the oven.

TAKE THE BACON OUT OF THE OVEN 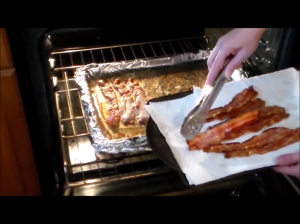 Take the bacon out of the oven and place on the paper towels.

9. While the pan is still in the oven, pull out the rack (then you don’t have to have the sizzling pan of bacon out on the counter) of bacon. Use the tongs or fork to remove the bacon one by one and place on the paper towels. At this point stacking may not be so much of a problem. The bacon needs to drain off the grease. It might be a good idea to cover the bacon and let it sit for a few minutes. It will get good and crispy this way. 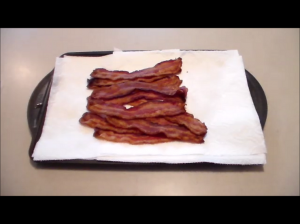 After the bacon has a chance to sit for a few minutes, it is ready to eat

10. After 10 – 15 minutes you should have bacon that is show quality. This can now be used for many different occasions like breakfast, bacon cheeseburger, crumbled for Mac and Cheese, salad, or just eat it.

Once the grease congeals it is time to throw the foil away.

11. Leave the pan of grease in the oven over night. Once the grease congeals, just fold up the foil and throw it in the garbage. 12. If you wanted to, you could probably put more bacon in the same pan and cook another batch in the oven. You could pour off the grease and start again. You could remove one layer of foil, discard, then add another. 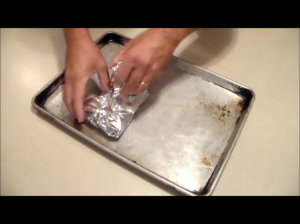