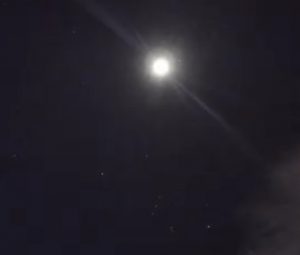 I was testing the Night Lapse function of my new GoPro Hero 4 and I was really impressed with my first time lapse of the night sky. The moon ended up rising out of the east halfway through the night. Many shooting stars were visible, as well as a few constellations. There was something that left a trail, either through the clouds or on its own. It may have been a jet, but it is undetermined. I can see some possibilities with this setting and will continue to experiment. The GoPro Hero 3+ only had a Time Lapse setting. I am still going to now test the GoPro Hero 3+ at night. With the Night Lapse setting, the shutter speed has many different settings. This video was with a 5 second shutter speed and shot at 30 second intervals.

I uploaded a video on Facebook and I didn’t think it did the night lapse justice. So I thought YouTube might be a bit better. You should be able to see the constellation Orion a few inches under the moon. Just above and to the right of the moon, Taurus. Then I think Venus is rising just as daylight approaches. There may be more constellations visible. Press the bottom right button to view fullscreen.