The HS720 by Holy Stone is a great starter drone. This drone is very well built and seems on the heavier side as opposed to the other ones I have seen. Not nearly as expensive as a “Professional” rated drone like the DJI Mavic 2 Pro or the Yuneec H520 Multicamera Drone. This drone has many of the features a professional drone has, but may not be as precise. One of the features that is very forgiving to the pilot is the RTH or Return to Home function. This is the function that lets the pilot relax and by pressing 1 button the drone will return to where it took off. The HS720 also has an automatic RTH function when it gets low on power. There are many settings that can be customized within the flight application on your smartphone.

So after connecting to the drone’s WiFi signal, the camera is then visible through the smartphone app. The phone is placed on the remote or transmitter and can be piloted by viewing the camera. Old schoolers, like me, will still look at the drone to see where it is flying. After going through the instructions and initially setting up the drone, 2 buttons put the drone in the air. Then it is a question of “where to we go now?” I like to go above all the trees and look around. The camera is also movable up and down from the remote, and side to side by turning the drone. Once you get used to flying it, it’s just like riding a bike. Except with around 50 more functions and settings. 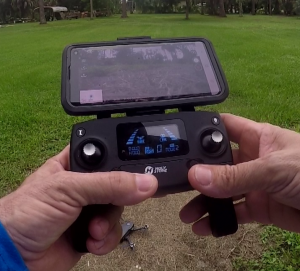 The HS720 drone also has “follow me” and “point of interest” functions.

The “follow me” function basically follows the remote around. Seemed like it wanted to stay around 20 feet behind me, but may get confused after a couple of flights. I believe learning how to calibrate the drone is a must. I think that when it gets bumped around a bit, it needs to be recalibrated. 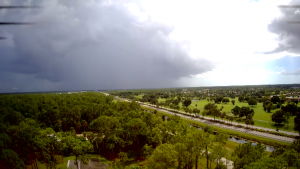 Definitely need some space to fly a drone. Buildings and trees around is not a good mix, especially for new pilots. What happens is the drone gets turned around and then you get confused and start making it go this way and that way and bump into something. It will just crash at that point.

Either way, this is a good entry level drone. The kit that I got had 1 battery and some extra blades, and a nice case. There are some other kits that have 2 and 3 batteries. The battery is said to last 26 minutes. This is plenty of time, but if you have a task ahead, you may want to get extra batteries.

They are saying the camera is 4K and there is a setting for 4K (3840 x 2160). I was only able to get 1280 x 720 resolution. Still decent resolution. The instructions say the video is stored on the TF card and in order to view the phone has to be connected to the drone’s wifi. I haven’t tried, but maybe if I plug in my phone to the computer in order to download the video while the drone is turned on and my phone is connected to its WiFi it will be available. I’ll have to put that on my list.